You are here: Home / Norteamerica / Rodeo in Texas: When and where was the first in U.S ? 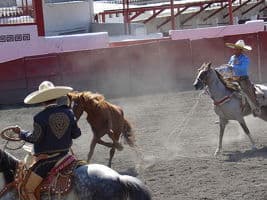 Rodeo in Texas, a Spanish tradition spread around the world

Where did the rodeos come from? Something that we consider so from the U.S, came from Mexico. Horses, cowboys, their clothes and even cows or cattle came from Spain before.

The origin is so evident that even in the U.S.A., this ranch activity is still called by the Spanish word Rodeo, which shows its historical origin.

Customs and clothes of Mexico

The territories of Texas were crossed by Spaniards already at the beginning of the year 1500, but they were occupied very at the end of 1600, and they were used as a border. For almost 150 years they belonged to New Spain and inherited some of the customs of the north of present-day Mexico, such as rodeos.

After the Mexican-American war, Mexico was forced to sign peace, by handing over half of its territory at a bargain price. By becoming a member of the U.S. In 1845, they continued to carry out traditional activities that were common especially in the current states of California, Arizona, New Mexico and Texas.

Rodeo was practiced in New Spain and the horses, cowboys, their harness and their clothes are Hispanic, from the North of Mexico and originally from Spain.

The use of the pike or spear caused them to be called Picador in bullfighting. He was also called Lancero or Varilarguero and even Piconero.

In New Spain, the border guards, the Cuera Dragons, who were soldiers on horseback, also used the pike or spear. They became famous for their effective cavalry charges.

The current initiation of an Andalusian Knight

Initiation of a young Andalusian, in the world of the horse and the bull

Report on the horse and the marshes in Spain. Learning about horse culture.

The training of a young Spanish man to face on horseback, his first bull of his.

First cattle rodeo in the present U.S: It was organized by the Spanish Governor of Texas, just as they were in Mexico, the cattle fairs with rodeo. The clothes of the cowboys were inherited and in the style of the Cowboys of Chihuahua in Mexico

From Mexico to Texas

This competition and show does not even have its own clothes as original since they were the ones used by cowboys in Mexico. The first rodeo in Texas was organized in 1787.

It was Martínez Pacheco, the Spanish Governor of the territory, who decided to organize the Rodeo as part of a party. The large increase in herds of cattle in the area well deserved a celebration in the style of those celebrated in northern Mexico.

Ranches were soon created in Texas and New Mexico

Cows of a special breed that were raised in the Guadalquivir Valley, in southern Spain, with long horns were brought.

These animals reproduced easily and survived in the field alone. Soon there was a great growth of cattle herds in Texas. And they well deserved a party like the ones that were held in the rest of New Spain

Rodeo and cowboys in North America and Hawaii

They are also used in Texas

The clothes that the cowboys wore were those of the cowboys from the bordering state of Mexico (Chihuahua).

In the homeland of Charrería, considered a national sport in present-day Mexico, the clothes used by cowboy in Western movies are already used. Actually the primitive rodeo was born in these territories, as a consequence of the huge herds of cattle and the equestrian culture that arrived from Spain.

This entertainment and competition arose from the work of livestock. Cowboys spent long periods isolated in distant lands. For fun they came up with these competitions, which tested their skills in everyday jobs. They called them Rodeos, for the turns, detours and turns they had to make to control or tie the cattle.

The harnesses for the horses brought by the Spanish to America evolved in the territories of New Spain and were also used in Texas.

Origin of the Rodeo

This activity that was celebrated as a sport in the festivities of central Mexico in honor of the Virgin of Guadalupe. It consisted of a horseman with the help of the lasso tame foals. Later it was applied to bulls.

It is considered the origin of the Rodeo. Set of activities to surround the cattle, control it and take it to its destination.

Although the cowboys of Mexico or Texas are so well known, it is forgotten that these customs were widespread in other Hispanic lands. In California, cowboys reached a high level, developing techniques and skills that allowed them to control cattle and even bears. His fame was spread by the great perfection of the technique. There are those who consider that they became the best in these arts.

A curious situation occurred on the Hawaiian islands. With the arrival of Europeans, some cattle arrived. And little by little the breeding of wild cattle grew, due to the large amount of grass, and without predators.

When the number of cattle was very large and created problems, they tried to control it, but without tradition or knowledge, they had it very difficult. Then the King of the Islands imported a group of Cowboys, Californians, Mexicans, etc. (expert workers from Hispanic Haciendas) who laid the foundations for cattle exploitation. When arriving from Hispanic territories and of Spanish descent, like the Spanish word, it was difficult to pronounce for a Hawaiian, something like Paniolo remained. And the name is still maintained, as a rancher or for traditional meat restaurants.

So do not be surprised if you see cowboys in Hawaii, with their hats and boots, they are Paniolos, the culture of the Spanish horse

Its origin comes from the South of Spain

They are still popularly known as Charros to all the inhabitants of the Spanish province of Salamanca. In these lands, the pastures are common where cattle are raised in a state of freedom from pigs to brave bulls. Formerly they were only the inhabitants of the area of ​​Campo Charro (it extended through a part of Salamanca and part of León), a region of meadows where fighting bulls were raised, for bullfights.This word is already used in the century XVII, to describe something rough, or coarse. It is supposed to come from the Basque language “Txar” which can be translated as rustic. It was used to refer to the shepherd or horseman on horseback.

Francisco Montejo (from Salamanca), as advance of the Crown, accompanied Hernán Cortés, created a livestock model like the one existing in Salamanca in Spain in the lands of Mexico

Later, more people from Salamanca, knowledgeable about the work, arrived to take care of the ranches. These first farms in Guanajuato reflect this cultural and livestock heritage. The cities of Salamanca and León were even created in Mexico, as a nucleus of cattle settlement.

It comes from Spain: Andalusia

In this equestrian exhibition with horses and riders from Andalusia (Spain), you can see some of the clothing and harness that the Spanish brought to America.

Cowboys sometimes wore leg protectors. What we have seen in Western movies, as something typical Texan, is also inherited from Spain.

Among the clothing, the use of chaps or chaps was common, which were placed over the pants protecting the legs. They were tied at the waist, being a kind of leggings. These protections were used to be able to cross areas with low scrub or undergrowth without hurting themselves.

Tradition at work and pilgrimages

Prepared for a pilgrimage, a young Andalusian woman in her traditional dress comes with her horse
It started as cowboy entertainment in Northern Mexico

The activities of care, surveillance and transportation of livestock that were carried out in the ranches of the Viceroyalty of New Spain gave rise to the rodeo.

The habitual movements on horseback of circling the cattle to group them and take them to another place became a sport for the free time in the secluded ranches sometimes separated from each other by long distances.

The different activities such as knocking down the calf, double lasso in pairs, riding the colt, riding the bull, single lasso, are some of the most popular tests.

This popular festival where bullfighters and rejoneadores demonstrate their skills, reflect the culture of the horse and bulls in Spain