You are here: Home / Norteamerica / Road to California: The Old Spanish Trail

The difficulty of accessing California was solved by rescuing from oblivion the Old Spanish Trail, a 2000 km route that linked New Mexico with the Pacific

Where did the route to gold pass?

This old Spanish trail has been rediscovered in the United States. A route of more than 2000 km that linked New Mexico with California, fostered trade and gold

When the independence of the 13 English colonies was proclaimed, some explorations were sent to the South and the West. Some of them use Spanish maps, others rediscover routes used by them, as is the case of the Spanish Way.

It is discovered that this road linked the interior of the country with California (Old Spanish Trail), by the Fremont expedition, which gave the name to recognize that this route had already been used by the Spanish

The routes discovered, explored and used by the Spanish in the United States reappear.

Roads and trails used by the indigenous people that also served to carry out explorations and commercial trips. Roads used by Spanish explorers and Hispanic travelers. Some routes that linked the interior lands with the Pacific Coasts

The route started from New Mexico

It went through Colorado, Utah and Nevada to California
Half Dollar coin on whose reverse the First Voyage of the U.S.A, by Cabeza de Vaca is commemorated

Celebration of the 400 years of the first crossing through the territory of what is now the United States of America, carried out by the Spanish Alvar Núñez Cabeza de Vaca in the year 1535

There were some attempts to establish an effective route from Santa Fe to the new California missions. It was a Franciscan Silvestre Vélez de Escalante, who together with Domínguez and the surveyor Bernardo Miera y Pacheco, in the company of 8 other men. The indigenous guides kept them safe throughout the tour. They would try to find the best route to California.

Although it did not reach the Pacific, it traveled through Colorado, parts of Utah, and returned to Santa Fe (New Mexico) through Arizona. He collected great useful information, especially the maps they made, for other travelers. In time that route would be called The Old Spanish Trail, based on many Indian roads.

They were possibly the first Spanish and first European travelers to visit the area. His reports and the maps of Miera and Pacheco would be published in 1778.

In one of these expeditions they rediscovered the Old Spanish Trail. In others they were watched by the Spanish and later detained by the Cuera Dragons sent in search of them.

The Old Spanish trail, rediscovered by the North Americans, has aroused great historical interest due to its interstate character

The expedition aimed to explore the Red River and the Arkansas. Later they explore the area of ​​Santa Fé but were located and detained by Spanish soldiers.

Jefferson, stimulated by the possibilities and the reports that he had from this area, prepared a Geographical and Botanical expedition. He also wanted to win over the indigenous people of the area and create commercial relations with Santa Fe.

As happened in the Lewis and Clark Expedition, they would use the Spanish maps drawn 30 years earlier, including that of Pacheco disseminated by the historian Herbert E. Bolton.

Fremont Expedition to the Rocky Mountains (1842) 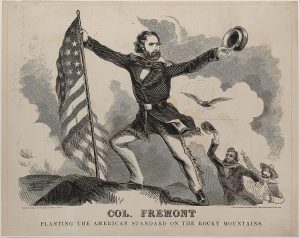 The publicity in the American press was as always a propaganda of national exaltation.

He finds the Spanish route, which for so many years had been used and is still being used

The American press nicknamed him “Pathfinder” (The Pioneer) because he made several expeditions. Very good propaganda to motivate the new American nation, after the independence of the 13 English colonies. However, few important American expeditions did not have the help of a Spanish map, which guided them much of the journey and ensured their success. Nothing strange since the Spanish had been going around for 300 years and expeditions throughout almost all of North America. In one of them, he meets the Old Spanish Trail that linked New Mexico with California since the seventeenth century.

The Spanish army stopped the expedition (1806).

Spain put all possible difficulties on the expedition from denying passports to her territory to sending soldiers to stop them.

New Spain feared that the many Comanches and Apaches under its control at the time would be used by the Americans against them. They had previously been armed by the French and caused assaults on ranches and even towns like Tucson. This led to long and costly wars.

Spain sent an expedition of 200 dragons from near Nacogdoches in Louisiana and another of 600 from Santa Fe. If the first did not stop the expedition, the second should.

His work was not appreciated by a very bad scientific publication

Because of the compiler of the 2 newspapers, the names in Latin and the scientific nomenclature were lost. For this reason, it was not given value, not even in his time.

They did not contribute new geographical knowledge since the area had already been explored by the Spanish and French. The expedition’s objective was to explore in a first phase the Red River up to Santa Fe and the Arkansas. She was closely followed by the Spanish Leather Dragons, soldiers on horseback. They were the border guards, who stopped them and brought the expedition back.

From Santa Fé New Mexico, through Utah, Nevada he reached Los Angeles from California. A long journey of 2,000 km but that facilitated access to California through the interior and increased trade. However, with the occupation of California and the entire Southwest of North America, New Mexico, Texas, Arizona, etc. the new settlers were not aware of this route. There were several sections and the enormous length of the journey made it easy to get lost in paths of no return, without water, deserts, etc.

They found and joined different trails used by the Ute Indians that allowed them to link the missions of the interior with those of California. It was of great importance because it avoided costly and difficult boat trips and allowed trade.

The 300 years of the Spanish presence in North America left their marks on the routes of the continent.

Spanish explorers traveled and spread over most of the United States. Although there were places in which there were no establishments or they have not been maintained due to the enormous difficulties of doing so, they were at one time or another in these 300 years of Spanish presence.