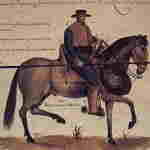 On the border, footprints.  There are traces almost 100 years before the English, and 300 before the Americans, the Spanish already maintained Apache and Comanches contact

Apaches and Spaniards, the unknown History of the West

Comanches and Hispanics, war and peace in the American West

Who were the first to deal with them?

Western movies associate him with Americans, but there were others before

The Respected Watchers: The Dragons.  Local people, well armed. They had 5 horses each.

The Comanches were originally from the Platte River area, in the states of Nebraska, Colorado and Wyoming. As they moved, they destabilized nearby territories

For 300 years Spain did not stop creating Missions and Forts in the U.S.
The missions of the 13 colonies later than England were destroyed by Indian tribes led by the Anglo-American settlers.

The missionaries created numerous missions, but only those of the indigenous attacks and English colonists survived, when they were protected by a sufficient number of elite soldiers, Cuera Dragones.
The Hispanic Traces Forgotten by History Cuera Dragons: An elite corps, effective, well armed, with soldiers born in New Spain, therefore adapted to the climate and customs of their territories.

Spanish wars and colonies in the United States

100 years before the English arrived, the Spanish already maintained their difference against the indigenous people of the United States. Some well-known tribes such as the Apaches, Navajos, Pueblo and later with the Comanches.

In the territories of the present United States

Network of Spanish Forts and Missions through the current territories of the United States
Those existing in the 13 colonies were destroyed by the English colonists either directly or by arming the Indian tribes to attack everything Spanish.

For almost 300 years there were forts, missions and colonies in the territories of the present United States of North America. Among them in some of the territories that the English would later settle, such as Virginia, North Carolina, South Carolina, Georgia, East Florida and West Florida.

This part of the colonization is unknown since only the history of the 13 colonies has been told since the arrival of the English. For the Crown of Spain, all the current territories in the area were known by the generic name of Florida.

For several hundred years, the Spanish dealt with the Apaches. There were clashes with the Comanches as they moved in from the North and threatened the Apaches.

There are still more than 100 place names placed by Spanish explorers in the lands of Alaska.

Even the current state of Georgia had important Spanish missions in its territory from the year 1526. While the Spanish evangelized in their missions, the English of the nearby colonies of Carolina and Virginia, opted for the reservations and the annihilation of the natives.