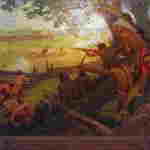 Hispanic victories on the ground, help the U.S.

Hispanic Victory in Yorktown, for her help

Thanks to Spain from the United States (U.S) forgotten

Expansion of the U.S. into Hispanic territories in Mexico

U.S.A: The Most Famous Spanish Explorers of North America

Spanish aid to the U. S in its War of Independence from the English is unknown. Without it, the victory of the 13 colonies would not have been possible

Spain decisive in the independence of the U.S

Why do they talk about France but not Spain in the U.S?

An Unknown Part of American History

The 1,000,000 pounds that the Ladies of Havana (Cuba) gave to the French, to pay the troops, can be considered the Foundation on which the Independence of the United States of North America was built.

The American historian Stephen Bonsal recognized it
The important Spanish aid to the Victory of U. S in the War of Independence from the English was concealed. Spain was decisive in the Independence of the United States of North America

Although it has not been disclosed, however all the main American leaders who participated in its War of Independence, acknowledged it openly and with gratitude

Spain not only participated in the war

It also defeated and expelled the English from the Gulf of Mexico, the Floridas, Mississippi and the Bahamas Islands.
Only the history of the 13 English colonies has been disclosed, but not of their Hispanic footprints
George Washington recognized the great importance of the victories of the Hispanic General Bernardo de Gálvez, leading the troops of New Spain against the English.

Spain was decisive with her victories over the English, along with North Americans and French, and achieved Independence-

The independence parents of the North American Homeland thanked the enormous Spanish help:
George Washington, Benjamin Franklin, Jefferson, Patrick Henry ..
During the years (1776-1779) Spain secretly helps North America. She supplied muskets, cannons, gunpowder, uniforms, medicine etc.
Spain defeated the English and seized their positions in the Mississippi and the Gulf of Mexico
Several consecutive defeats at sea, made England look in danger and fear a Franco-Spanish invasion.
The miracle came from New Spain: History would have been different: Spain financed the final battle of Yorktown and decided the war.
Spain came to control the entire Mississippi to Canada. Destroying Fort St Joseph, on the Canadian border, he showed his power.
The United States seized half of Mexico’s territory a few years later, forgetting its help
Hispanic Heritage can still be seen in many symbols, flags, shields, and customs of the U.S.A.
The Spanish colonists created more than a hundred Forts and Missions in the territories of the current United States of North America.
An agreement of the North American Congress, curiously forgotten. the painting of Bernardo de Gálvez. It has taken almost 250 years to apply, what the American Congress recognized in 1783, on the General Hispano Gálvez.
The recognition of this Hispanic General that he organized and led the troops, as well as the shipment of supplies from New Spain to the 13 colonies. Although these were decisive for the Independence of the United States of North America (U. S)

North America, Central America, Europe and even Asia, in the Philippines.

The capture of almost a hundred English ships in the port of the Bahamas and the occupation of the islands, together with the imminent invasion of Jamaica and the Isle of England itself, fatally divided the English troops and ships.

The support of Spain is fundamental. Decisive victories, thanks to Spanish help in: Saratoga, Yorktown ..
Both in the first victory of the Americans, the Battle of Saratoga, and in the last (Yorktown), the support of Spain with weapons and military equipment was essential.

It is unknown that in the battle of Saratoga, George Washington’s militias used the muskets, gunpowder, ammunition, uniforms, tents, etc., that Spain had supplied them since the previous year.

This victory was very important because of its consequences. Thanks to this victory of the Americans over the English, France decides to support the struggle for her Independence and gets into the war.

And helped itself in the Ohio River, defeating the English in San Luis (Missouri) and
in Michigan. She also went to George Rogers Clark in his victories in the battles of Vincennes in Indiana, Kaskaskia, and Cahoria in Illinois.

According to the data of the United States representative Arthur Lee in Spain, he supplied:

Plus the contribution of long-term food and medicine.

But in reality Spain contributed much more in a secret way to buy time and be able to prepare, delaying the start of a war against England, as it happened.

Surprises of history: decisive Spain
Silenced by North American historians, Spain’s entry into the war and her help, meant a radical change in the outcome of the war.

Unfortunately many North Americans do not know the Hispanic origins of half their country. The occupation of the old territories that belonged to Mexico, continue to preserve their history.

A historical Oblivion of more than 200 years.

But most are also unaware that the Independence of the United States would not have been possible without the decisive contribution of Spain to its cause. The role of France has been mythologized and that of Spain belittled.

It is forgotten that Spain controlled the territory of the Mississippi River, the South and the Caribbean. With the decisive battles in which she defeated the English, she created a safe zone. From there, Spain was able to supply war material and medicine to the American patriots.

Americans with no historical memory: they have ignored their Hispanic roots

Spanish possessions in the Viceroyalty of New Spain (Year 1800)
More than 2/3 of the current Territory of the United States, had colonies, missions or contact with the Spanish for almost 300 years
Later the inhabitants of the 13 English colonies occupied half of the territory of Mexico
Spain at the time of the American War of Independence controlled most of its current territory.
She ruled the entire territory of the present United States, west of the Mississippi River including New Orleans.
In the North it extended from Mexico to its new Alaskan colonies.

The Spanish Empire extended throughout the world:

Europe, Asia, Africa, América.
It is forgotten that Spain in the fifteenth, sixteenth, seventeenth, eighteenth, and nineteenth centuries colonized the largest empire in history
The Conspiracy of Silence: Spain’s decisive aid was hidden
The Americans wanted to forget it. They soon seized the North of New Spain occupying half of the territories of Mexico
That was their response to those who helped them the most to be an Independent Nation.
It is difficult for an American to understand his own story, because it is incomplete
The importance of the Hispanic culture of that time has been hidden
Universities in Havana and Mexico, colleges, the largest shipyards, the largest commercial collaboration, theater …

The history that is explained in the schools is partial

Not everything is explained, on many occasions the Hispanic is excluded, something that the educational committees themselves recognize. There is a leap in its history between the discovery of America by Colon and the creation of the first permanent English colonies.

But when the English arrived they did not find in America the ignorance or the absence of civilization as they say. At that time there was already a rich economic and cultural life.

The reality is that at that time Mexico already had a university. While in the new English colonies the houses were made of wood, in the Hispanic territories large constructions and stone buildings were already being made.

Although the first official University created by the Spaniards was in Peru (Universidad Nacional Mayor de San Marcos) also in 1551. And unofficially since 1538 the University of Santo Domingo worked.

Before 1600 Spain had built 7 universities

At that time of the Revolution and the War of Independence, the 13 colonies were still not much of a thing, neither in population nor in development.

On a cultural and social level

The difference was very great.

Havana in Cuba,had a university, a seminar and a theater. His social life did not have to envy that of Europe. On an economic level, not only were its plantations famous. It had one of the largest naval shipyards in America, where ships were also armed.

In one of them, the Santísima Trinidad ship was built a few years before, a fabulous ship of the Spanish navy with 135 guns, the first ship in the world with four bridges.

The independentists of the 13 colonies

Texas, California, Arizona, Cuba and Mexico paid the aid.  The Viceroyalty of New Spain provided much of the aid that Spain sent to the rebels.

For this he put a voluntary tax, but still raised a large amount of money. With this money they paid for the purchase of cannons, muskets, uniforms, medicines, etc. that were sent to the 13 colonies.

Even part of this money was also used to supply the French army and the French fleet that came to help the North American rebels.

Even the uniforms of the soldiers were of Hispanic origin and supply
A historical curiosity, which tells us to what level the help reached.

Among the complementary material supplied by Spain, there were not only tents, long-lasting food and medicines. Fabrics, cloths and uniforms were sent from Valencia.