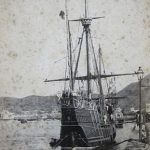 Christopher Columbus: What did he hide throughout his life?

Throughout his life Christopher Columbus concealed his origin. What was he hiding? What danger prevented her from revealing his past? He gave false clues about his nationality.

Why did you hide your origin and previous life from him?

Place of his birth, his life and discovery

Where was Columbus from?

He famous for Italian but he did not know Italian languages

His is life Europa and América

Important dates in the Discovery

Christopher Columbus before the New World

The Hidden World of Christopher Columbus

There are many theories, but some stand out for the evidences and tests they present
He appears little by little, and the mystery of him is clarified, as the many clues that he left are followed, the words of him, his friends, enemies and his knowledge.

The mysteries of his enigmatic life before Discovery of America Christopher Columbus wanted to hide the history of his life prior to his arrival in the New World. He even went so far as to give false leads, out of fear of his enemies. A mystery with many clues to follow

His secret protected her.

Throughout his life he concealed his origin. He even gave false clues about his nationality. Many countries have considered him one of his subjects.

The Catalan theory of the origin of Christopher Columbus has had many followers. The Kingdom of Aragon was not allowed to access the Atlantic Ocean, this could be a reason to hide its origin. His travels depart on some key dates and events in the history of Spain, the expulsion of the Jews.

An increasingly consistent theory, the Lord of Sotomaior who went from being a privateer to participating in the war against the future Queen Elizabeth.

Colón is a Galician surname. Many of the names that he put to his discoveries are also place names of places in Galicia

Chronology of his life

The story of the possible origins of him and of his life, in the most important dates from before to after the discovery.

Many countries claim their origin
Different theories, but some illuminating facts about his life, highlight one of them

Historians have analyzed his life and give us possible clues about his origin. The key historical events of the time, some previous ones, such as the coronation of Isabel as Queen of Castile or the expulsion of the Jews, were very important in the expedition of the voyages of Christopher Columbus and the Discovery of America.

The expedition was financed by Jews and had the participation of many of them. One of Columbus’s trips coincided with the date of the expulsion. They even embarked the day before to avoid problems and did not allow anyone to disembark that day. This date of expulsion of the Jews was delayed until the expedition was ready.

A mysterious and problematic man from Sotomaior, appears at the reception of the Catholic Monarchs and a certain Christopher Columbus leaves it.

In the testament of Christopher Columbus, a phrase indicating that he was Italian was added later with another letter.

Christopher Columbus did not know any of the languages ​​spoken in Italy at that time. For this reason, when he wrote letters to an Italian, he did so in Latin.

Colón’s signature was accompanied by signs that coincide with the genealogical tree of Pedro Madruga, the Lord of Soutomaior, his great-grandparents, grandparents and father.

There are records that confirm that Colón was a Galician surname at that time.

Columbus put more than 100 Galician place names of the Rías Bajas, baptizing with them his discoveries.

A son of Christopher Columbus said that his father had filed his last name. On the altar of a church in Galicia, someone filed the Collon surname by removing an “L”, leaving “COL.ON” with a space.

Christopher Columbus had the support of the Sotomaior family who participated in some of his trips. He supported the Sotomaiors in their appointments in Puerto Rico.

The Genoese Colombo is not from the time of Columbus. One of his sons went to Genoa to look for relatives on the death of his father and found none.